When I got my Gaita Pedrazales chanter 2 weeks ago it came with 2 reeds. The chanter is beautiful, made from Santo Palo wood with nice grain.

Plastic Reed:
One reed was made from plastic, very small stable and blades, but I could not get it to sound a octave, the top register was very sharp.

Cane Reed
The cane reed was very good, it played well with not to much pressure, it looked nice.

Since I had a class that evening I did not alter it to fit the chanter, I thought to leave it to my teacher to get it fitted properly.
In the class the teacher found it to be too flat. The Pedrazales chanter plays in Bb, and it was below that, not by much but enough to make the group of gaitas sound like a swarm of bees! So, there was two options, either push the reed further into the chanter by opening the wooden hole more to accommodate the reed or to cut a bit off the reed tip. Out came the knife and off came the reed tip, scraping to reduce pressure resulted in a sharpened reed, but still not in Bb, out came the knife and off came the reed, scraping and a chanter that played in Bb. “All is well that ends well” so the saying goes…not so.

When I got home I took out the reed and left it over night to dry. The next day the reed had warped a little. Central heating was the problem, but worse than this when I came to adjust the reed the binding came away too, leaving the 2 cane blades in my hands. The thread had unraveled, I do not know if this was due to the central heating system, but the thread and metal are not effected by heat generally? I will never know. The 2 reeds came from the same maker, but they seemed well constructed when I got them. I wrapped thread around the blades to try and make it play again, it did but not good enough for the Pedrazales.

So, 2 days after I got the chanter and reeds I had no reeds left to play the chanter! What a beginning.

The only thing to do was to use Scottish Highland chanter reeds. These HBG reeds are from Pakistan, some would say useless, but they are not so bad if one is not into competitions. They play and are cheap enough to play around with in Border pipe chanters etc. They play in A/La, and luckily my chanter was Bb. So out came the knife and off went the reed tip, until I had a chanter in Bb in the bottom note, but the top was sharp, out came the tape and the top notes played in tune. The pressure was wrong, too much and the drone stopped and I could not get the notes, too little and the bottom notes were “double toning” when all fingers were closed. I added thin wire so I could adjust the reed and keep it in position.

I took a trip to Madrid to see if they had reeds that would fit. They had some Pedrazales reeds, made by a maker in Madrid, the bindings on these reeds were glued, so they would not unravel and they looked good. I tried 3 of them but all 3 were sharp in the top notes, nothing worked. Then I tried the Galician gaita reeds for a Bb chanter. I put it in and blew…Bb exactly. The reed worked first time and it was made so I could move the reed in and out so making it Bb sharp…or flat. The pressure was nice, and There was no “double toning” in the bass notes. I was a happy man again. 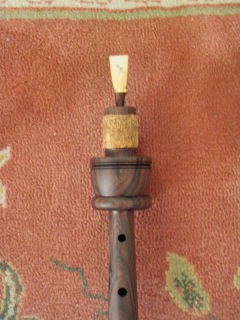 The Conference went well. I gave my paper on the Open-ended flute in Iberia. I got some positive feed back from other participants, and made some constructive contacts. A few leads which might lead me to other areas of music inside of Spain and Portugal which can only be positive, but in the question of the open-ended flute inside of Iberia is still in question and probably always will until some concrete evidence emerges of this flute type in Iberian history.
Other ney papers were given at the Conference, Turkish ney was, for me, interesting. But I found their information only related to Turkey. But the Turkish ney is surely more than that, as it was the Ottoman ney, which had its influence as far as Iberia. Also when one hears the styles of pre-1926 neyzens they style of playing is not like the ´mystic´style of one hears today in Turkey. It is more of a Arab style, melismatic; and with influences of Western music with uses of arpeggios etc. Neyzen Tefik can be said to use these influences.
We can not just look at one instrument and give all the credit to one country, no country works in such isolation, especially with a large Empirical Empire like the Ottoman.

Since there is only a few days to go until I fly off to Porto in Portugal, to give my paper on the “Open-Ended Flute of Iberia”, at the Organology Congress in Aveiro University / A N I M U S I C : Associação Nacional de Instrumentos Musicais / National Association for Musical Instruments – Portugal. I thought to share my Abstract here to post the question “Where has the open-ended flute gone in the Iberian Peninsula?

Commonly known as the Nay, or Kaval (or many other names), I believe it once exisited in Iberia during the occupation by the Moors for over 8 centuries. It is a long time to be under the influence of any power, and one would have thought that such an versatile instument such as this flute type, would have left its mark on the Iberian musical landscape? But, it seems to have completely vanished, except for some Ensembles who are using it in Sephardic and Andalusian recreations, but they are using it with no historical basis, as there is little to find. I think more work needs to be done on this topic, by people who can translate old text documents and find out in what capacity this flute was played and in what music. 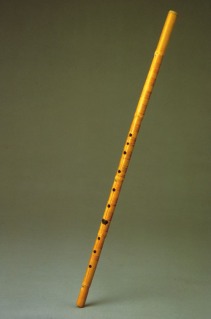 “The Iberian Ney: Renewal and Invention”
By Kevin Tilbury

My paper intends to describe the open-ended flute of North Africa and asks the question, “What has happened to the open-ended flute of the Iberian Peninsula?” Since instruments have crossed over from north Africa into the Iberian Peninsular at different periods in history and many of these instruments have survived, flourished, transformed and progressed, I ask why the opened flute, such as the Nai and Qasba, which are evident in north Africa have not survived in Spain and Portugal. There seems to be a lack of evidence present in today’s musical sources.
Yet, the Iberian Peninsular offers an ideal environment, geographically, climatically and musically for this instrument to flourish and adapt and feel at home amongst the music of many regions and styles of Iberia. My own research so far in will show that there is amble interest and source material to resurrect and construct these types of flutes. With interest in Andalus and Sephardic music and various instrument makers constructing and experimenting with old traditional instruments it seems a good time to open the question and hopefully examine why and how the open-ended flute disappeared from the Iberian Peninsular.
Without drawing any final conclusions I hope to open certain areas of research, questions and debate asking why and how the open-ended flute died away and if there is factual evidence to reinvent this instrument back into the Iberian musical landscape.”

Like Loading...
The Final night of the Penrith Concert was a lot better than the previous night. The audience were more livelier, laughing and participating with the performers, also the performers were in a better mood, livelier and more energetic, I do not know why and who was influencing who?
I changed my set that night, I included 2 different melodies to the first set of tunes: Chevy Chase (a Border Ballad tune)  /Mallorca / Hexham Races. These are tunes that I have played for years but they are also tunes I am sure of and are probably know to the audience.
When I play I tend to do 18th century melodies which are not very popular but I thought tonight to ‘play to the audience’ and to get used to performing on stage once more, not to compete with myself as I normally do by playing new tunes to an audience who will not recognize them. When I play on the streets it is good to play new and obscure melodies as not many are listening and I can practise these melodies, but I am there on stage to entertain others not myself, so the classics are performed, melodies they can sing a long too and recognize.
On this last night also I felt more confident with the stage and performing. I was changing the melodies and I wanted to play solo, I wanted to ‘play with the microphones’ too, to change the rhythms a little make them more lyrical and expressive.